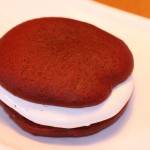 A whoopie pie is a cross between a biscuit and a cake and I have been wanting to try making whoopie pies for awhile I was inspired on the weekend when I saw a You Tube video of them being made. I Googled a few recipes and did a mix of two which B1 is calling “almost my new favourite food”

Despite the strange name, which also resulted in them being called Whoopie Cushions and Whoop-de-doo Pies at home, we all agree they are worth making again.

Using an electric mixer, beat butter, sugar and vanilla until light and fluffy. Add eggs, 1 at a time, beating well after each egg.

Sift flour, cocoa, bicarbonate of soda and baking powder into a large bowl.

In a jug, add the buttermilk, food coloring and vinegar.

Drop level tablespoons of mixture onto prepared trays, 5cm apart, allowing room for spreading. Alternatively, to get even amounts and nice round mounds, use an ice cream scoop.

Bake each tray for 8 to 10 minutes or until puffed and cooked through. Stand on trays for 2 minutes. Transfer to a wire rack. Cool.

To make the marshmallow filling, whisk the egg whites, sugar, glucose, vanilla and salt in a heatproof bowl over a pan of simmering water for 10 minutes or until a ribbon trail forms when whisk is lifted.

Transfer the marshmallow mixture to an electric mixer bowl and beat for 5-8 minutes or until the mixture has cooled, is thick and holds it shape.

Place whoopies, base-side up, on a clean work surface. Either spoon or use a piping bag to fill one half of the whoopies. Place the remaining whoopies on top and press lightly to sandwich together. Place the whoopies in the fridge until you’re ready to serve them.

This entry was posted in Baking, Biscuits, Cakes, Recipes. Bookmark the permalink.