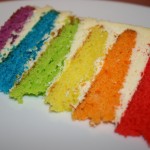 I spent hours in the kitchen on Sunday 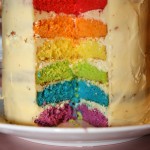 creating  a trial cake for B1’s birthday. Mostly it took hours because I only had one 6″ cake pan and each layer has to be cooked separately. I copied the Rainbow Doodle Cake from Sweetapolita, who got it from Whisk Kid. 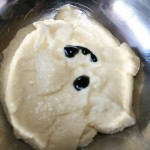 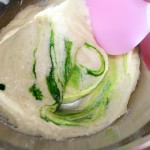 of the buttercream frosting. I won’t tell you what else I plan to do, just in case B1 reads this before her birthday, but stay tuned as I will blog the results. 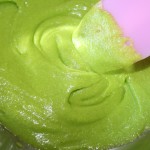 I used a gel colour by Americolour, that is available at Spotlight and it gives a great vibrant colour. Much better than the 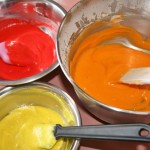 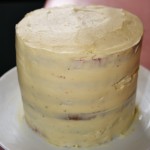 Really, it looks a bit average with the icing on it (this is also due to my lack of cake decorating ability), but once you cut it it really looks awesome. We were all crowded in the kitchen for the cutting and there were plenty of smiles and “wow’s” once it was cut.

I can’t wait to actually do the “big” version. Looks like work will get leftover’s again. I am sure they won’t complain.

This entry was posted in Cooking, Ramblings. Bookmark the permalink.