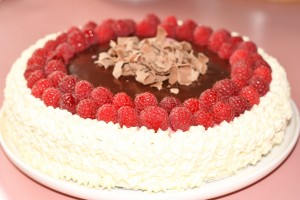 This cake was made for the DB’s birthday. His request was a chocolate cake with raspberry jam and cream in the middle, just like he used to have as a kid.

Well, I couldn’t just stop at a normal chocolate cake with jam and cream, could I? So, using the power of Google, I adapted the following from Sprinkle Bakes and Diana’s Desserts to create a grown up version of his childhood birthday cakes.

This cake takes awhile to make, so make sure you have a fair portion of a day available to cook, build and set it. It is a bit of effort, but well worth it.

Preheat oven to 180°C. Grease a 15cm round baking tin.  Line the bottom of the pan with a round of baking paper.

In a heat-proof bowl (preferably stainless) beat together whole eggs, egg yolks, sugar and salt, using an electric mixer at high speed.  Place bowl over pan of simmering water and continue beating with the electric mixer until the mixture is warm. Remove bowl from water. Continue to beat until mixture is cooled and increased in volume This will take 5-7 minutes, and the batter should be thick and leave a trail when the beaters are lifted from the bowl.

Bake for 30 minutes or until cake springs back when touched with finger. Cool in pan on wire rack for 10 minutes. Loosen edge with knife and invert cake onto a rack. Carefully remove paper. Place another rack on cake and invert again. Cool completely.

Raspberry Syrup:
Combine sugar and water in saucepan over medium heat. Heat to a boil. Remove from heat and let cool. Stir in liqueur. (if you happen to have any of this syrup leftover, it tastes great topped up with soda water;))

Raspberry Bavarian:
Let raspberries thaw in a saucepan. Add sugar to the thawed raspberries and juice. Heat to a boil and simmer 10 minutes. Strain mixture through a fine-mesh sieve into bowl. Cool to room temperature.

Combine liqueur and gelatin in heatproof cup and let stand 5 minutes.  Heat in microwave for 10 seconds or until gelatin turns to liquid.  You can also melt it in a saucepan on the stove top if you don’t have a microwave.

Whisk into the raspberry purée.

Chocolate filling:
IMPORTANT: Make this immediately before assembly or it will set and you will not be able to pour it into the cake and get a nice smooth, glossy finish.

Heat the cream over a medium heat until just starting to simmer, but do not boil. Add the chocolate and a pinch of salt and stir until melted and combined. Check the taste and add further salt until the bitterness of the dark chocolate is reduced, but not until it tastes salty.

Remove from the heat and add the egg yolks. Stir until combined. The heat of the chocolate mix will gently cook the eggs and make it like a custard. 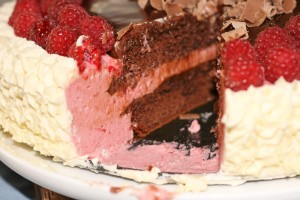 Level the top of the cake with a serrated knife then cut horizontally into two equal layers. Place one layer, centred  in the bottom of the 20cm spring form pan, cut side up. Brush with raspberry syrup until coated and started to soak in nicely but not wet.  carefully pour over ½ of the chocolate filling, trying to keep it on the top of the cake and not letting it drizzle down. Don’t stress too much if it does start to ooze over the sides.

Pour half of the raspberry bavarian cream over and around the sides of the cake. Lightly drop the pan on the counter top one or two times to ensure the cream settles into the empty ring around the cake.

Place the other cake layer in the centre. Brush with raspberry syrup as above. Carefully pour over the remaining chocolate mixture, again trying to keep it on top of the cake. Fill in the outside ring with the remaining raspberry bavarian cream, so that you have a ring of raspberry and the centre circle is chocolate.  Gently drop on counter top as before.  Cover and refrigerate until set, at least 2 hours.

Run a small knife between the dessert and the spring form pan. Gently remove the spring form collar. Pipe whipped cream to cover the outside and just onto the top outside rim, using a small star decorator tip (if desired). Arrange the fresh raspberries in two concentric circle around the top edge of the cake.  Make a small pile of chocolate curls or shavings in the centre of the cake. 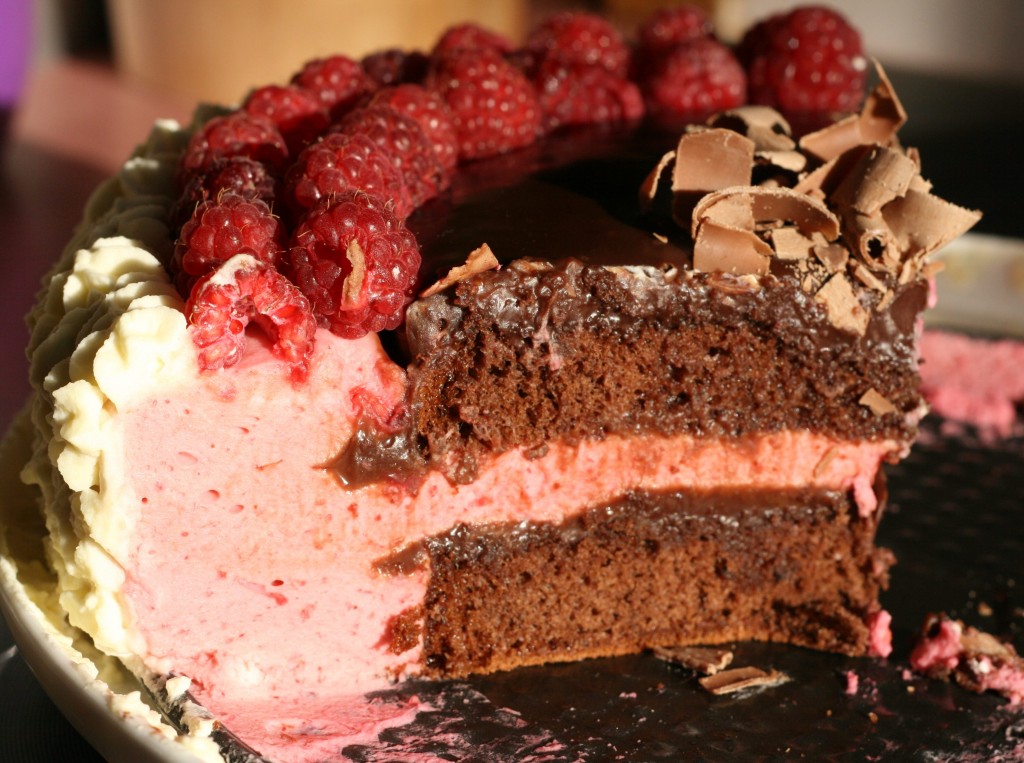 This entry was posted in Baking, Cakes, Recipes. Bookmark the permalink.