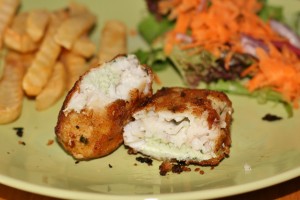 This is an adaptation of a dish that is done in the restaurant, a fish mousse surrounded by flathead tails and covered in a bread crust.. Mine was no where near as nice looking or as tasty as the restaurant dish, (which you would expect) but it was a good experiment and I was pretty chuffed with the effort at the end of the day….. That was until B1 tasted it and deflated my ego with “it’s just gourmet fish fingers!”. Oh well… 😉

Trim the flathead into approximately 10 cm pieces. Thin the larger fillets so that they are a similar thickness to the smaller (tail end) fillets. Keep any trimmings for the fish mousse. You will need 50g of fish trimmings for the mousse and 9 fillet pieces left over.

Process the 50g fish trimmings in a food processor. Add the egg white and process. Add the lemon juice, 1 tablespoon parsley and salt and pepper and process. Slowly pour in the cream and mix well.  Refrigerate for 30 minutes.

Meanwhile, remove the bread from the freezer and trim the crusts. Slice the bread as thinly as possible, around 1mm slices.

Add the remaining parsley and chives to the melted butter.

On 3 sheets of cling wrap, lay four slices of bread on each sheet, laying them slightly overlapping in a square shape. Brush the bread with the melted butter mix until it is soaked.

In the middle of the bread, lay one piece of fish. Top the fish with fish mousse and then enclose the mousse with two more fish fillets. Roll the fish in the bread and seal into a “sausage” with the cling wrap. Trim the bread if needed before rolling. Refrigerate the fish sausages until the butter has solidified again and the sausage will keep it’s shape.

Once the fish parcels are ready, remove from the cling wrap and fry until golden. Don’t be surprised if they do not keep their round shape, mine ended up as bricks, but were still quite tasty. 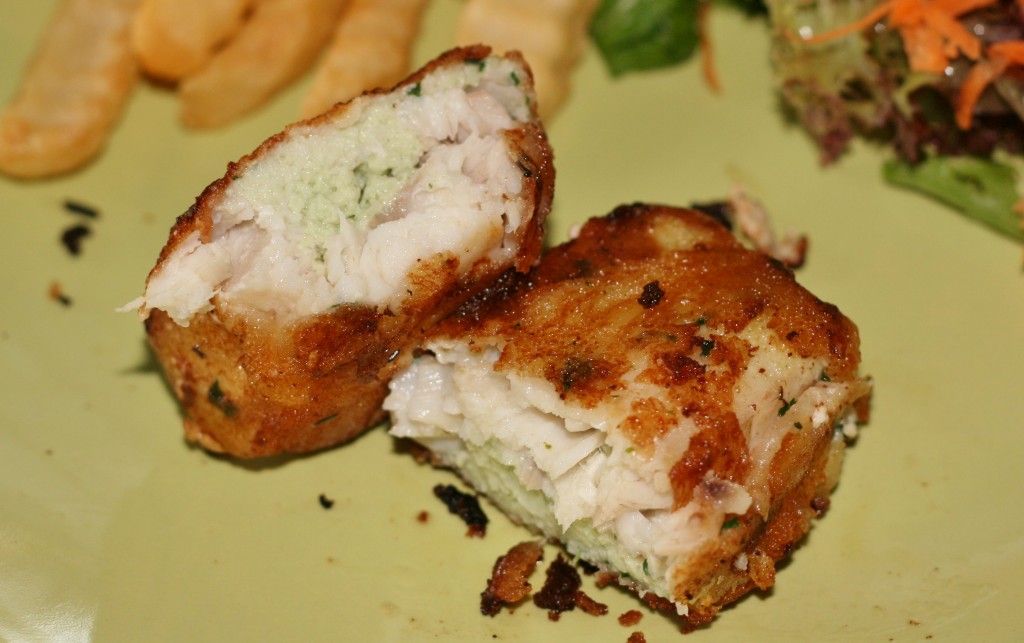 This entry was posted in Recipes, Seafood. Bookmark the permalink.