This is my favourite thing to drink while sitting in the spa and watching the stars. The original recipe suggests that you serve with ice cubes and soda water. Personally, I can’t stand the idea of watering it down and choose to omit those ingredients. The other thing I do is double the sugar syrup, Cointreau and wine and that ensures there is enough to drink for a long spa stay. 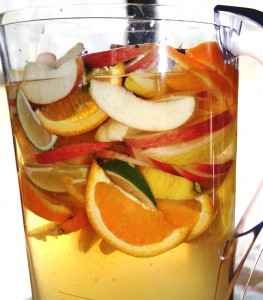 Stir the sugar, water and cinnamon stick over medium heat until the sugar dissolves. Simmer for 1 minute. Set aside to cool.

Combine the sugar syrup, Cointreau, apple, orange, lemon, wine and ice in a large jug. Top with soda water (if you are a complete nutter do the soda water bit). I sometimes throw in a sliced lime as well, if I have one handy.

I leave the jug in the fridge for up to 4 hours (if you can wait that long) to give a stronger fruit flavour.

So, I have the sangria in the fridge……. what do you think I might be doing tonight 😉

This entry was posted in Beverages, Recipes. Bookmark the permalink.